Located in northeastern Texas, Collin County was established in 1846. The county, and its government seat, McKinney, were named after Collin McKinney, one of the first settlers in the county and a signer of the Texas Declaration of Independence. Collin is one of the most populous counties in Texas, ranking sixth. Agriculture, dairy farming, manufacturing, wholesale and retail trade are important elements in the county's economy. However, a big percent of the county's population worked outside the county, with its proximity to the Dallas metropolitan area. Though not the county seat, its largest city, Plano, is the business and educational center of the county. 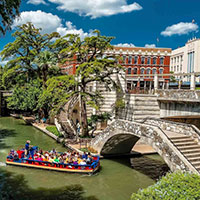