Erath County is located in the state of Texas. The county seat of Erath County is Stephenville. George Bernard Erath is the namesake of the town. He was an early explorer of the area and also served as a soldier at the Battle of San Jacinto. The county was originally formed from Bosque and Coryell counties in 1856. That same year, John M. Stephen offered to donate land in the area for a townsite which was later named Stephenville after him and was also selected as the county seat. Top sights situated in Erath County are Bluff Dale Vineyards, Dr. Pepper Museum, Wk Gordon Center-Industrial History, and Ben Hogan Museum. 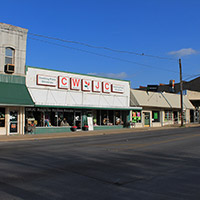