In January 1823, Stephen F. Austin received a grant from the Mexican government and began colonization in the region of the Brazos River. The Constitution of 1824 gave Mexico a republican form of government. It failed, however, to define the rights of the states within the republic, including Texas.

On June 26, 1832 – The Battle of Velasco resulted in the first casualties in Texas’ relations with Mexico. After several days of fighting, the Mexicans under Domingo de Ugartechea were forced to surrender for lack of ammunition. 1832-1833 – Dissatisfaction with the policies by the government in Mexico City triggered the Convention of 1832 and the Convention of 1833 in Texas.

March 2, 1836 – The Texas Declaration of Independence was signed by members of the Convention of 1836. An ad interim government was formed for the newly created Republic of Texas. The Brazos historic site, the location of the original signing of the declaration of Texas March 2, 1836 – has been used ever since as a historic landmark and gathering site for celebration.

For the full story on the intriguing history of Texas culture – check out Fariya’s article here:

Looking at the Texas Revolution Through A Critical Lens

In honor of celebrating Texas Independence Day and expressing what it means to be Texan – there are several events occurring (with COVID safety and weather precautions, of course!). And if you’d rather stay indoors during the beginning of March, there are other options to support the Lone Star State’s culture and history: local food delivery and watching noteworthy Texan films!

Break out your best western wear and get ready to have a good time at TEXFest, a free celebration of Texas Independence Day, featuring craft beer, good food, and local artists performing Texas music. 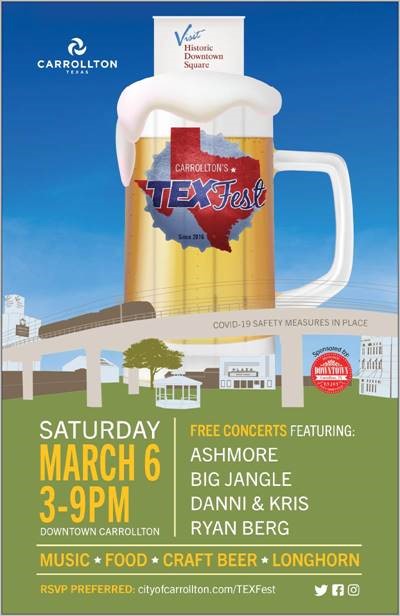 This year’s event will look different as the public’s health and safety continues to be the City’s highest priority. TEXFest will be broken into four sessions, with each session allowing a maximum capacity of 100 attendees. The schedule for TEXFest includes:

While TEXFest entry is free, walk-up attendance will be on a first-come, first-served basis until the maximum capacity of 100 attendees per session has been reached. Each attendee must have a ticket, which can be purchased by visiting cityofcarrollton.com/texfest. The only way to guarantee entry into a session is to pre-purchase a $6 ticket for admission that also includes a commemorative souvenir beer glass.

This year the Annual Texas Independence Day Celebration will not take place at Washington on the Brazos historic site, location of the original signing of the declaration of Texas March 2, 1836. Instead, Heritage Place Park in Conroe will be the statewide celebration site for activities starting at 10:00 am and ending at 5:00 pm at 500 Metcalf.

There are many organizations confirmed to attend the 185th Anniversary Celebration. Attendees to the free event can expect to see re-enactments, hear cannons, watch the dance performances, and listen to historical music from the 1700’s played on fiddles with the Cellaire String Band or cowboy music that keeps Texas history alive from K.R. Wood.

This event is sponsored by Spirit of Texas Bank, the City of Conroe, Quest Engineering, and the Conroe/Lake Conroe Chamber of Commerce. Temperatures will be taken at the entrance to the park and masks/social distancing is required.

Local grocery stores like H-E-B offer curbside pickup and delivery.  And because H‑E‑B prides themselves in providing customers with products and services of the highest quality, they want to go straight to the source. Partnering only with growers and suppliers, that happen to be local Texans, through the Go Local program.

And this is just the start, there are plenty of other ways to support your local producers and farmers by using the TexasRealFood directory – especially during this time of need and community support!

Many of us love a great Western film, and sometimes – the older, the better. But there is a great amount of passion when it comes to residents of Texas talking about their favorite films.

Most of these films are primarily set in Texas — but not necessarily filmed here. The movies do an excellent job at characterizing the people, way of life or essence of the state.

Movies like Hell or High Water, Bernie, Friday Night Lights, Boyhood and The Last Picture Show – are great to watch! And a nostalgic contribution to the Lone Star State.

You can check out Houston Chronicle’s full list “50 Greatest Texas Films Ever”.

Stephanie is a writer and graduate student studying Sustainable Policy. In hopes of one day creating an ecovillage for mentally and physically disabled residents - she values the importance of education, wellness, and sustainable living. She searches for strategies and information about the food we eat, how it affects us, and how we can choose where it comes from. By shortening the path of what connects us to our food, we can reconnect with traditional methods that we’ve lost touch with over time.

Looking at the Texas Revolution Through A Critical Lens

Is Alternative Living and Circular Thinking the Solution?

Seaspiracy Review: the Facts, the Opinions – the...

Ground Yourself Through Food and Nature

Tips for Reducing Your Impact This Easter

News, Films and Events in the World of...

Which Texas Farmers Markets Are Open 27th and...