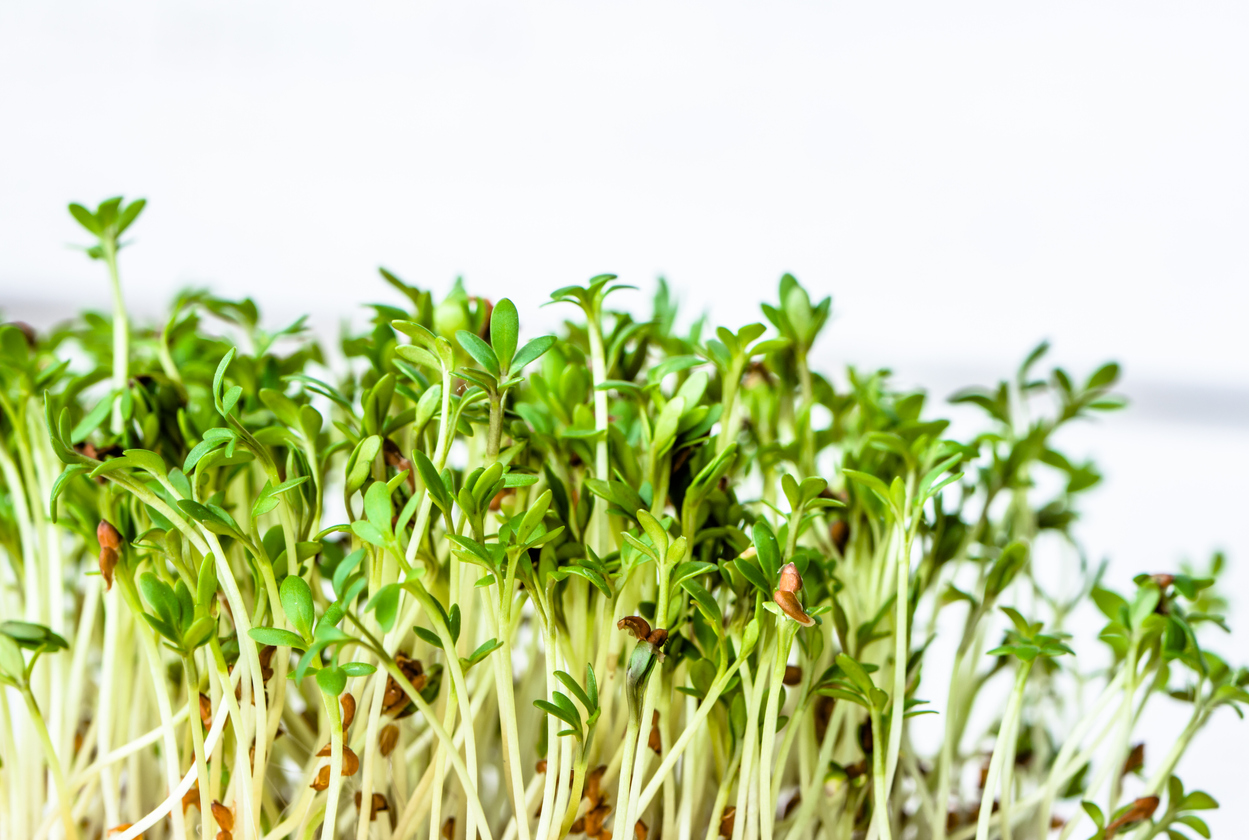 Broccoli sprouts are basically immature or young broccoli – a three to four-day-old broccoli plant to be more specific. However, they don’t taste much like the full-grown ones. Instead, they taste more like radishes with an appearance similar to alfalfa or bean sprouts. They have white flimsy stems along with tiny green leaves. They are fresher, cleaner, and crunchier, but they give a more grassy flavor along with a hint of sodium or sulfur taste.

Raw sprouts became a dietary staple around the 1970s. However, it wasn’t until the 1990s when broccoli sprouts were studied, established, and became popular. By the year 1997, it was discovered that broccoli sprouts contain high amounts of glucoraphanin, a powerful and long-lasting antioxidant.  Soon enough, these sprouts were mentioned in a New York Times article and created a sudden high demand which eventually led to a global shortage.

Nevertheless, the best thing about broccoli sprouts is that they are easy to grow at home. The seeds are cheap and it will only take a few days before you can enjoy their taste and nutritional benefits. But, if you’re in a hurry, you can also buy the supplements. However, they are not yet strictly regulated so it’s better to eat the real thing. Plus, you don’t want to miss the lovely taste it offers.

Broccoli sprouts can be purchased at some farmers’ markets, grocers, and health food stores. However, they can be really expensive compared to growing your own. In fact, you could be spending 20 times more! In addition, you might not be able to tell how fresh they are. Sulforaphane spikes on the third and fourth day of sprouting and store-bought sprouts are more likely to be longer than this. Thus, broccoli seeds are cheaper and widely available. You can even buy them online and have them delivered to your home. Nonetheless, if you don’t have time to keep growing them, you can purchase broccoli sprout powders and/or capsule supplements instead. But, many of these products are made from inactive myrosinase sprout or seed extracts. And, it’s almost impossible to identify which items contain both glucoraphanin and active myrosinase enzyme. With an inactive myrosinase enzyme, your body may not convert any of the glucoraphanin to sulforaphane.

Growing broccoli sprouts are not just inexpensive, but it’s more convenient and easy to grow. They are almost foolproof and they’re ready to eat in just a few days. Not to mention that they’re healthier than most of the other vegetables. It’s as simple as putting 2 tablespoons of broccoli seeds in a mason jar, filling it with cool filtered water just enough to cover the seeds, securing it with a mesh or sprouting lid, and soaking them for 8-12 hours in a dark, slightly warm spot, away from direct sunlight, with a temperature that ranges between 65 and 75ºF. Keep the jar upside down, slightly angled, so that any remaining water can drain. The next day, or as fast as 8 hours, rinse and replace with fresh, filtered water. Do this procedure twice a day for the next 3-4 days and dry them off using a paper towel to absorb moisture. Store accordingly and if you want a constant supply of broccoli sprouts, start the process every 2-3 days.

You might think that broccoli sprouts are too good to be true. They are super healthy; yet, they’re cheap and easy to grow. However, there’s only one downside of this crop: the seeds are more susceptible to growing E.Coli during the process of sprouting. Due to this, the FDA recommends the seeds of commercially grown sprouts to be soaked and sterilized with 20,000 parts per million of calcium hypochlorite, a chemical compound, before sprouting.

Meanwhile, broccoli sprouts are not susceptible to pests due to their insect-deterring compound, glucosinolates. In fact, they are included in the EWG’s Clean Fifteen List. The Environmental Working Group (EWG) is an American group that focuses on the advocacy of agricultural subsidies, pollutants, and toxic chemicals. They have created the Clean Fifteen list, which is being updated each year to rank fruits and vegetables that contain the lowest pesticide contamination based on the samples tested by the USDA and FDA.

Broccoli sprouts are widely cultivated around the world. But, the world’s largest producer of their fully-matured vegetable, broccoli, is China, followed by India and the United States. In the U.S., the state of California leads the production by 90%, followed by Arizona, Texas, and Oregon. The crop is also grown largely in Italy, Northern Europe, and the Far East.

Broccoli sprouts are best eaten raw. Otherwise, myrosinase, which is the enzyme that converts glucosinolates to isothiocyanates and sulforaphane, will be deactivated as you cook them. Not to mention that the sprouts will become mushy as well. But, although they quite have a bland taste, they provide a crunchy, grass-like, and stringy texture that goes well not only in salads but also in sandwiches. Just be cautious and make sure to wash them thoroughly prior to use as they are susceptible to carrying E.coli. That is also the reason why they’re not recommended for those with low immune systems. But, other than that, you can put them in cold-pressed juices, smoothies, or gazpacho. You can also add some on top of avocado toasts. Nevertheless, regardless of how you choose to eat broccoli sprouts, they will provide tons of nutrition that you won’t feel guilty consuming.

As mentioned, broccoli sprouts should be rinsed thoroughly prior to usage. It’s also highly suggested to wait at least 12 hours from the last rinse to storage so that all the remaining moisture can drain off. Then, transfer the sprouts into an airtight container and store them in the crisper drawer of the refrigerator. Make sure that you refrigerate them dry so that they don’t grow mold and bacteria. While it could last for up to two weeks there, we suggest you use them as quickly as possible.

Meanwhile, you can also freeze them to prolong their shelf life. However, frozen broccoli sprouts can only be used in smoothies. For convenience, you can roll the sprouts into a ball, place them on ice cube trays, and fill them with water prior to freezing.

The main reason why broccoli sprouts are best eaten raw is to prevent the deactivation of the enzyme myrosinase which makes the production of the cancer-battling compound sulforaphane impossible. But, there’s actually a hack to that. According to one source, mustard seed can replace myrosinase. So, you can still enjoy the benefits of cooked broccoli sprouts by simply sprinkling some mustard seed powder in them.

Broccoli sprouts contain an excellent amount of dietary fiber. In fact, a cup of these sprouts can provide around 4 grams of dietary fiber, as opposed to 2 grams in regular broccoli. A cup can also give around 60% of the recommended daily intake of vitamin C, along with a considerable amount of vitamin A, vitamin E, and calcium.

Along with other cruciferous vegetables, they can decrease the risk of chronic ailments such as cardiovascular disease and cancer. On top of that, it also provides anti-inflammatory and anti-aging benefits. Thanks to the isothiocyanates that are activated when cruciferous vegetables are eaten and chewed. But, there’s more. Even though all the cruciferous plants provide this, broccoli sprouts can provide an insane amount, with up to 100 times more than its relatives. In addition, their sulforaphane is especially potent. Not only that sulforaphane can prevent cancer, but it can also reduce the risk of heart disease, diabetes, and neurodegenerative diseases such as Huntington’s and Alzheimer’s disease.

When Are Broccoli Sprouts in Season in Texas?