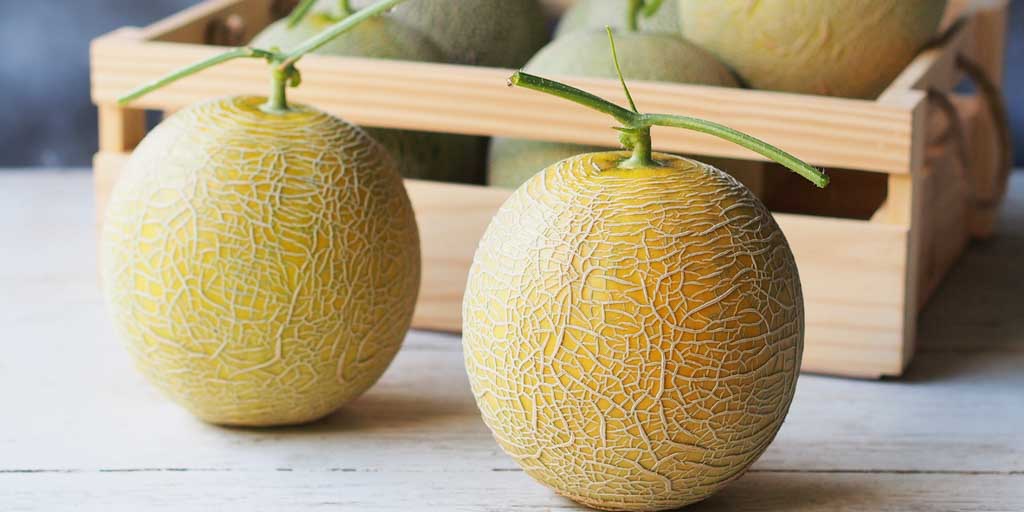 The Honeydew melon (or honey melon as it is known in some places) is a cousin of the more popular cantaloupe. While it isn’t as popular as its cousin, the honeydew is as nutritious as its cousin, and in many cases, much sweeter and tastier than the cantaloupe. In a blind taste test, it is virtually impossible to differentiate the two as the flavor profiles are nearly identical. The differences between the two are mostly visual, with Honeydew having green flesh and the cantaloupe having orange flesh.

Weight should also be another factor to consider when choosing a honeydew melon. It should be hefty or heavy of its size. If a honeydew melon feels light, then move on to the next one.

Finally, you can check the section where the vine was attached to. It should be a little bit soft to the touch, and it should still smell sweet and fragrant.

Avoid honeydews with visible bruising or ones that have soft spots.

Honeydew melons account for 20% of all the melon production in Texas. All of the Texas melon production goes directly into the local markets, which includes both fresh whole fruits and prepared fruit salads found in stores and groceries.

The majority of honeydew production is centered around the Lower Valley area, with the rest being produced in Trans-Pecos and the Winter Garden.

Honeydew melons can also be easily grown at home, but an ample space is required as their vines tend to crawl outwards.

Honeydew melons are part of the EWG’s Clean Fifteen List, with only 14.2% of all tested samples having more than one pesticide residue. While this may be the case, honeydew production still entails the usage of pesticides that contaminate the waterways, soil, and air around where they are grown. The reason for the low pesticide detection is that the honeydew’s thick rind protects it from contamination.

Honeydew production is semi-dependent on pesticides, so purchasing locally and from certified organic farms are still the way to go.

Honeydew Melons thrive in well-drained, medium-textured soil with a pH of 6.0-8.0. They should be planted when the soil temperature is higher than 70F. A low temperature of soil and air can stunt honeydew melon vine growth.

Honeydew melons can survive well in USDA hardiness zones 4-11, which means that they can thrive anywhere in Texas; just make sure to plant them according to your local climate to avoid extreme temperatures, which may affect plant growth.

Honeydew melons must be mature once harvested as immature fruit will no longer mature once it is off the vine. After harvest, the melons are cooled off to remove excess field heat and to prolong storage life. They are then ripened with ethylene gas for up to 24 hours to ensure uniform ripening.

After the ripening stage, they are packed according to customer specifications before shipping out.

As with any other fruit, vine-ripened honeydew melons have the best taste and sweetness when compared to their ethylene-ripened counterparts. If you’re lucky enough to live near to an organic grower or a farmers’ market, then going organic is the way to go.

Give the honeydew a thorough wash to remove any external contaminants from the rind. After washing, slice down through the stem area vertically with a knife to halve the melon. Scoop out the seeds and the mushy part in the middle before proceeding to cut into wedges or cutting the flesh for consumption.

If you want to store Honeydew Melons for a longer period, remove them from the rinds and store in a freezer-safe container in the freezer for up to one year without any noticeable loss in quality.

Honeydew melons, just like any other melon, is best enjoyed in its raw form. It can also be used on fresh green salads, fruit salads, toppings for cakes and desserts, smoothies and other cold preparations.

Honeydews can also be pureed to be used in glazes and sauces, but its cooked applications are limited to grilling and as flavoring components for baking.

The Honeydew Melon is the Cantaloupe’s sweeter and greener cousin.

When Are Honeydew in Season in Texas?

Buy Local Farmfresh Honeydew in Texas Directly from the Producer