The county of Runnels, located in the west-central region of the Texas State, was established in 1858 and organized in 1880. It was named after Hiram G. Runnels, a legislator of the state. Runnels County has been economically dependent on its agriculture, oil, and manufacturing industries; cotton, wheat, sorghum, dairy, cattle, goats, and sheep were its major agricultural products. Tourism also plays a significant role in its economy; its county seat showcases the Ballinger Carnegie Library, which is one of the only three original Carnegie libraries in the state. It also celebrates annual events such as the Rattlesnake Roundup, Arts and Crafts Fair, Texas State Festival of Ethnic Cultures, Pinto Bean Cookoff, and the Miss Ballinger Pageant and Parade. Furthermore, Mexican, American, Chinese, and Mediterranean restaurants serve this county. 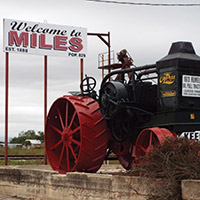 1
Thank you for reporting, a team member will get back in touch with you soon
×