Out of the 50 states in America, there are only eight who have an official state dinosaur – one of which is Texas. The Texas Legislature originally appointed the Pleurocoelus as the official state dinosaur in 1997. Perhaps it was due to the discovery of 21 different dinosaurs’ fossils in the state, or the finding of a major dinosaur footprint near the city of Glen Rose in 1938. Nevertheless, Pleurocoelus was known as the state dinosaur for twelve years until it was correctly renamed to Paluxysaurus jonesi as soon as the previously mentioned genus got reclassified. Hence, even though fossils like such can be found in most of the states of America, the state of Texas features some of the most important finds in history that covers almost the entire geological epoch from Precambrian to Pleistocene era. 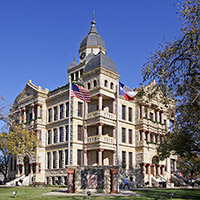